You Can Ride An Elevator Inside the World's Largest Cylindrical Aquarium

The Radisson Blu hotel in Mite, Berlin features a 24-meter tall aquarium with an elevator inside.

By  Jessica Miley
Nov 28, 2017
The AquaDom in Berlin Susanne Nilsson/Flickr

The ocean is full of wonders from prehistoric sharks to reflective jellyfish. But getting down below the surface can be cold, expensive and difficult. Luckily for the ocean-curious, a hotel in Berlin offers a glimpse of the watery deep simply by catching an elevator.

The aquarium known as the AquaDom is located in the Radisson Blu Hotel in central Berlin, Germany and also forms part of the Sea Life exhibit. The tall cylindrical structure is filled with over one million liters of salt water. The huge aquarium weighs over 2,000 tons and is supported in place with a nine-meter foundation.

The adventurous centerpiece was built at a cost of $13 million USD. A central elevator in the middle of the aquarium gives guests an up close and personal view of the marine life inside. The aquarium is constructed from transparent acrylic panels which at its thickest place at the bottom measure 22 centimes, at the top they thin down to a still chunky 16 centimeters.

Visitors to the aquarium will be treated to witnessing more than 1,500 tropical fish swimming through colorful coral and aquatic plants. There are more than 110 different species of fish from the Pinocchio-like paddlefish to the white striped clownfish.

This huge amount of fish require hand feeding and each day the hotel's fishy friends consume more than 8 kilograms of food. The tank needs almost constant cleaning as well getting a wipe down 3-4 times a day. The aquarium certainly makes the Berlin Radisson Blu one of the most unique hotels in the world creating an unbeatable atmosphere for its guests and visitor alike. But the Radisson Blu in Berlin isn’t the only hotel in the world to spoil guest with an inside view of the mysteries of the deep.

Tour the world via hotel aquariums

The massive 3,215-room Mandalay Bay Hotel and Casino in Las Vegas has a whopping 490 million liter aquarium that holds over 2,000 sea creatures and more than 15 different kinds of sharks. It even has a special touch pool zone, where visitors are allowed to get very personal with different species including sharks, rays, and horseshoe crabs. 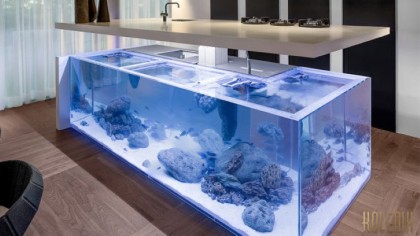 The Ocean Island brings the ocean into your kitchen

If Vegas isn’t your thing but still want to sleep close to some exotic underwater creatures then check out this impressive hotel and aquarium combo at the Atlantis Paradise Island Resort in the Bahamas. Not only does the luxury hotel features an aquarium called The Dig, which is home to 6-feet long eels the animals also inhabit its outdoor pools. After a day at the beach sit back and enjoy a dolphin show or don a wetsuit and get friendly with some sharks. Aquariums can play an important role in animal protection but they also have their fair share of critics who believe keeping animals in captivity is cruel. SeaWorld has promised to end its orca shows that feature trained killer whales performing tricks and taking cues from trainers. It is currently developing a new SeaWorld concept in the Middle East that doesn't feature the large fish. The popularity of the live orca shows declined after the release of the documentary Blackfish that told the story of the whale Tilikum that was bred and raised in captivity for 25 years.