University of Washington students have figured out a secure way to charge a smartphone with almost-infrared lasers.

By  Shelby Rogers
February 22, 2018
Charging laser and guard lasers are normally invisible, but they have been inserted in order to demonstrate the tech. Mark Stone/University of Washington

When wireless charging docks made it into the mainstream thanks to companies like Qi, smartphone users thought charging couldn't get any easier. However, a team from the University of Washington beg to differ. They've engineered a new way to charge a smartphone by using a system of laser beams.

The team created a way for a narrow, invisible beam to charge a phone from across the room and at a speed just as fast as the modern USB cable. They developed a new type of cell on the back of a smartphone, and that cell reacts with the laser and converts that energy to charge the phone.

The charging beam gives off 2W of power at a distance of up to 4.3 meters (approximately 14 feet) and to a 15 square-inch cell. The smartphone emits high-frequency "chirps" so that the small microphones on the laser emitter can determine the location of the phone in the room.

"This acoustic localization system ensures that the emitter can detect when a user has set the smartphone on the charging surface, which can be an ordinary location like a table across the room," said co-lead author Vikram Iyer, a UW doctoral student in electrical engineering.

But lasers and electronics don't always seem to mix in a safe manner. Those assumptions are what the UW team wanted to address -- how to make laser charging a safe (and potential) reality.

"Safety was our focus in designing this system," said co-author Shyam Gollakota, an associate professor in the UW’s Paul G. Allen School of Computer Science & Engineering. "We have designed, constructed and tested this laser-based charging system with a rapid-response safety mechanism, which ensures that the laser emitter will terminate the charging beam before a person comes into the path of the laser."

The team added in custom security features that included a metal, flat-plate heatsink to dissipate the heat from the laser. They also added a reflector-based contraption to automatically shut of the laser should a human want to walk in front of it while charging.

Akra Majumdar, an assistant professor of physics and electrical engineering, led the team in developing the safety features.

"In addition to the safety mechanism that quickly terminates the charging beam, our platform includes a heatsink to dissipate excess heat generated by the charging beam," said Majumdar, who is also a researcher in the UW Molecular Engineering & Sciences Institute. "These features give our wireless charging system the robust safety standards needed to apply it to a variety of commercial and home settings."

The beam is created by a laser emitter that sends a beam that's close to the infrared spectrum. The safety system includes "guard beams" which are near the charging laser beam to 'protect' it. It's important to note that the guard beams don't actually charge the phone, but they just stop the charging beam whenever someone gets too close. 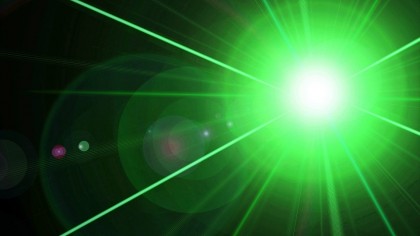 "The guard beams are able to act faster than our quickest motions because those beams are reflected back to the emitter at the speed of light," said Gollakota. "As a result, when the guard beam is interrupted by the movement of a person, the emitter detects this within a fraction of a second and deploys a shutter to block the charging beam before the person can come in contact with it."

The researchers hope that their safety features could one day make wireless, laser-focused charging of devices a reality. This sort of charging would certainly make the nightly task of plugging up one's phone to charge before bed easier than looking around for the cord.

These 3 Top-Rated Chargers Will Make Your Life Easier