You Will Be Able To See The Northern Lights This Friday in the U.S.

If you are in the United States this week you may finally get the chance to see the Northern Lights. Due to a G1 (minor) geomagnetic storm, the natural wonder will appear over the U.S. this Friday, November 9th, according to the Space Weather Prediction Center (SWPC).

Where to See the Light Show

Audiences will be able to see the lights in the Northern States, Montana, Michigan, Wisconsin, Minnesota, North Dakota, and the northern tip of Maine as well as Canada and Alaska.

The lights are scheduled to appear on Friday from 4-7pm EST and appear for a second showing the same night from 10pm-1am. Nevertheless, you will not be able to just look up into the sky and see the lights.

To have the full experience, you need to have very clear and dark skies with an unobstructed view of the northern horizon. Make sure you are as far away as possible from any light pollution.

Light Up the Sky

You probably know of Northern Lights and maybe are eager to witness the beautiful phenomenon at some point in your life. However, do you know what causes the Northern Lights?

Those dancing lights in the sky are actually the collision between electrically charged particles from the sun that enter the Earth’s atmosphere.

Also known as the ‘Aurora borealis’ in the North and ‘Aurora australis’ in the South, the spectacular lights show up in a wide range of colors that includes different shades of red, yellow, green, blue, and violet. However, the most common colors are pale green and pink.

As you are well aware, the surface of the sun is millions of degrees Celsius, causing frequent collisions between gas molecules. Electrons and protons are thrown from the sun’s atmosphere and blown towards the Earth by the solar wind. 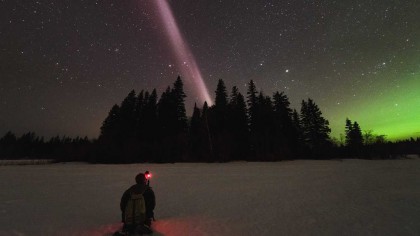 On average, the Aurora generally is 80 kilometers wide and 640 kilometers above the earth's surface.

Let us know in the comments if you get a chance to the Northern Lights this Friday.