The research opens an opportunity to use carbon fiber as the battery as well as load-bearing material for future cars and aircraft.

According to a recent study, it is possible for carbon fiber to store energy in a vehicle, thanks to its ability to act as battery electrodes. This study has come up as a boon and has opened countless avenues for structural batteries.

The research was led by the Swedish University, the Chalmers University of Technology and the researchers have discovered a way of making batteries by modifying composite panels.

They carry structural loads and come with numerous benefits such as improved power and battery life and reduced weight of the device.

Theoretically speaking, structural batteries perform a dual responsibility of lending structure as well as being able to store energy in order to reduce the weight of a vehicle.

Although scientists have been trying tirelessly to be able to reap the benefits of structural batteries, the initial prototypes of these systems have lacked in both the structural aspect as well as the energy storage.

The results of this study have given new hope to researchers to use carbon fiber as a structural battery component in aircraft and vehicles. As shared by Leif Asp, the lead researcher of this study, “It will also be possible to use the carbon fiber for other purposes such as harvesting kinetic energy, for sensors or conductors of both energy and data. If all these functions were part of a car or aircraft body, this could reduce the weight by up to 50 percent.”

The researchers found that the carbon fiber that reflected good electrochemical properties in the study were stiffer than steel while those with poor electrochemical properties were more than twice as stiff as steel. As explained by Leif Asp, the aviation industry might require thicker carbon fiber composites in order to compensate for the structural batteries with reduced stiffness.

In his words, "The key is to optimize vehicles at system level -- based on the weight, strength, stiffness and electrochemical properties. That is something of a new way of thinking for the automotive sector, which is more used to optimizing individual components. Structural batteries may perhaps not become as efficient as traditional batteries, but since they have a structural load-bearing capability, substantial gains can be made at the system level. Also, the lower energy density of structural batteries would make them safer than standard batteries, especially as they would also not contain any volatile substances." 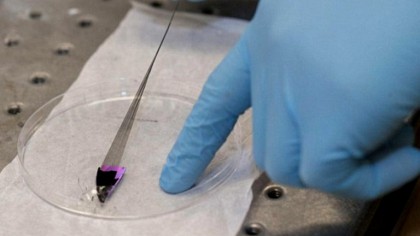 This study has definitely presented new opportunities in regards to structural batteries because the carbon fiber can now be used as an integral part of the energy system. When this kind of multifunctional material is used in vehicles, it can significantly help in weight reduction, which has been a major challenge for electrification till now.

Via: Chalmers University of Technology