Now people can record and send mosquito sounds to Stanford University engineers for location and tracking purposes, which is also a big step in creating a map of the some of the most harmful disease-carrying mosquitoes in the world.

Few of us would deny the discomfort that we experience hearing the ominous buzz of a mosquito: the impending contact with our skin, after which a sleepless night, itchy skin, or worse yet, the unleashing of a potentially life-threatening infection are likely to occur. But, the flapping of their wings, while at times off-putting, serves as an important classification marker for scientists. 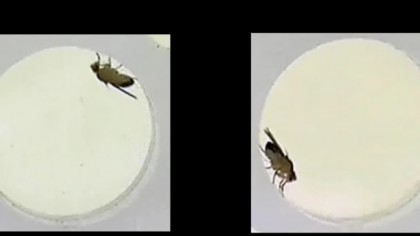 Can a fly be made to moonwalk?

In essence, the frequency and sound of the wingbeat helps identify the species. Though theories and research surrounding this method of classification are by no means new, a team of engineers at Stanford University have taken the work in this field one important step further. They have compiled a massive mosquito reference dataset based on wingbeat sounds—the largest of its kind by their account.

In the end, they were able to compile data for 20 various species, though some would argue scratching the surface—there are roughly 3,500 known species. However, the researchers controlled the data set by making disease-carrying mosquitos their highest priority, as well as the ones which proved easier to find. The findings from the study, titled “Using mobile phones as acoustic sensors for high-throughput mosquito surveillance ”, appeared in October’s eLife journal.

Best of all, this is scientific research of the best variety—one that encourages active engagement and participation from the public. They are appealing to the global community to record the sounds and then submit them online to be used as a tool for more accurately identifying the location of various mosquito species. Perhaps in an effort to legitimize the usefulness of mobile phones in data collection, the researchers themselves used an older and modestly-priced Samsung phone to compile their own database.

Haripriya Mukundarajan, Stanford University Mechanical Engineering doctoral student, as well as lead author on the study reports that up until now roughly 200 recordings have been received, and she and the other engineers have been hard at work plugging the data into the algorithm that will classify them, citing that there is room for improvement, given that the algorithm currently being used has an accuracy rate of about 68 percent.

For her, the most urgent motivation behind the research relates to epidemiology and global health. The majority of the data collected was carried out in laboratories belonging to the Centers for Disease Control and Prevention laboratories: “It’s really important to map mosquitos across the world, because they’re spreading to a lot of new habitats now,” adding about the usefulness of recording sounds, “Sound is easy…[i]t’s the most noninvasive, easy way to identify a mosquito.”

She is hoping that her efforts will represent a contribution in helping to eradicate some disease-carrying species. Creating a map is critical, according to Mukundarajan: “It’s particularly scary, because it’s spreading to new habitats quite widely.” To this end, they’ve launched a website, called Abuzz, describing it as a “Citizen-based mosquito monitoring system.” It even provides an instructional video for data collection.

Study co-author Manu Prakash explained the global impact of the project: “We could enable the world’s largest network of mosquito surveillance – just purely using tools that almost everyone around the world now is carrying in their pocket.”