Virtual Reality has opened up huge opportunities for motion controllers, and as the applications of VR gets more complex in the future, the use of these controllers will grow exponentially. So far, the controllers that we have today are mostly hand-held. The Japanese startup, Xenoma, however, wants you to use your upper body with their smart shirt.

Unveiled at CES 2018 yesterday, the ‘E-Skin’ technology was debuted at last year’s CES. The smart shirt translates your upper body’s motion (including arms and torso) into a software input for games or motion-based applications on-screen.

The E-Skin apparel makes use of stretchable sensors and electronics to detect the user’s movement and is equally durable and comfortable to wear. The ‘E-Skin’ includes a shirt with 14 sensors, a Hub with 6-axis accelerometer and gyroscope and a software license to use the software development kit (SDK). The information transmission takes place from the Hub to a smartphone, tablet or PC through Bluetooth. The smart shirt can also be machine-washed just like a regular shirt.

While the mini-game that you may apply your ‘body’ on at CES is just a proof-of-concept. The smart apparel has great potential to be utilized for analyzing exercise and athletic sports.

"Our e-skin is quite useful and insightful for recognizing what kinds of activities the wearer is doing without being constrained by a camera," said Ichiro Amimori, Co-Founder & CEO. "We believe there are a variety of needs where e-skin can provide a solution to satisfy and help people."

The company wants to develop smart shirts in future that can track how you run, monitor your vitals as well as track your respiratory system.

"Connected clothing will be the most natural way for people to interact with others and their smart devices in the future."

"Connected clothing will be the most natural way for people to interact with others and their smart devices in the future," Ichiro noted. "E-Skin apparel is completely different from other wearable devices in the sense that first and foremost it’s still just a shirt that anyone can wear. The added benefit is its potential to provide solutions to many people across many different verticals.” 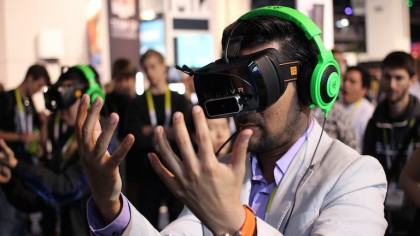 The pre-consumer version of the e-skin smart shirt will be available through the Kickstarter campaign, which is expected to start in early August. The company is planning to raise $50,000 with the Kickstarter campaign. This pre-consumer version of the smart shirt will have the same functionalities but at a much lower price of $479. However, it will only be made available to the first 100 backers of the campaign.

Make Your Own Automated Paper Cutting Machine with This Guide