The CEO of the groundbreaking electric vehicle carmaker discusses plans to ramp up production, reduce car costs and more with MKBHD.

Elon Musk is one of the most famous innovators of our time. Known for his futuristic vision and a risk-averse appetite for disrupting conventional industrial sectors, Musk has become a common household name synonymous with the future.

Whether it is his dreams on sending reusable rockets in Space or plans for building new electric vehicles, Musk's endeavours attract a huge fan following, and reporters all over the globe are always on their toes ready to write about him and his companies.

However, the past few days have not been the best for the American entrepreneur. His recent tweet about taking Tesla private and an interview with NY Times outlining the struggles he is going through as a CEO has only made the situation more intense for Musk and his firms.

A positive interview in the midst of chaos

Leaving the issues aside, popular Youtuber and avid Tesla fan Marques Brownlee released an in-depth interview with Musk discussing science, technology and other important points that have nothing to do with the painful news circulating since last week.

In the fun and light video, Musk discusses how competitive the automotive manufacturing landscape is, and his hopes of bringing down the design and technology costs to reach economies of scale and provide a true mass-market electric vehicle that would cost under $25,000. “That’s something we could probably do,” he said. "If we work really hard, I think maybe we could do that in three years.” 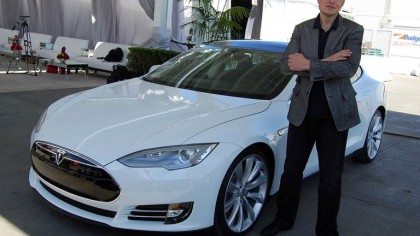 If Musk and his team manage this feat, it will prove extremely beneficial for the company. Tesla can then directly compete with giants like Toyota and Honda that produce all-electric cars under $25,000 because of their ability to achieve better economies of scale.

When asked about the firm's near future plans, Musk said that he is working with his team to ramp up the production by figuring out ways to make two cars at the same time without compromising on the quality of each car.

Musk also hinted about replacing his cars' side mirrors with cameras to improve aerodynamic performance. While the technology is not new, the road safety authorities do not allow automakers to bring this change yet.

However, Musk wants to give it a try at least in the US where owners are allowed to modify their cars. “Manufacturers are required to have side mirrors, but I believe that the owner is not,” he said.

In the concluding part of the interview, Musk also briefly discussed the next-gen Roadster his company is planning to bring to production by 2020. Designed to reach 0-60 in 1.9 seconds, the next-gen Roadster will be fitted with a 200 kWh battery pack that will provide a 600-mile range to the car.

Musk said that they are planning to double the layers of battery cells which will be inside a single battery pack enclosure. Best of all, this upgrade will not significantly impact the available internal space.

“You can double the number of modules inside and it will still be about an 80 percent increase in the volume of the pack or 4-5 inches higher with current technology,” he said.

While the past few days were certainly not in the favor of Musk and his companies, this endearingly nerdy interview with MKBHD certainly brought this painful week to a peaceful and happy end.