If you are a keen bike rider or you take part in races on your bike you will want to keep fit year round. One way of doing this is hooking your racing bike up to a trainer so that you can exercise on your bike indoors. The downside to this is that it is boring as there is no one else riding with you and there is no scenery flashing by as you pedal for many miles. This could all change soon thanks to Zwift as indoor bicycle training meets massive multiplayer online game. You can ride and train on your bike alongside other cyclists from around the world and race each other in a 3D computer generated setting. 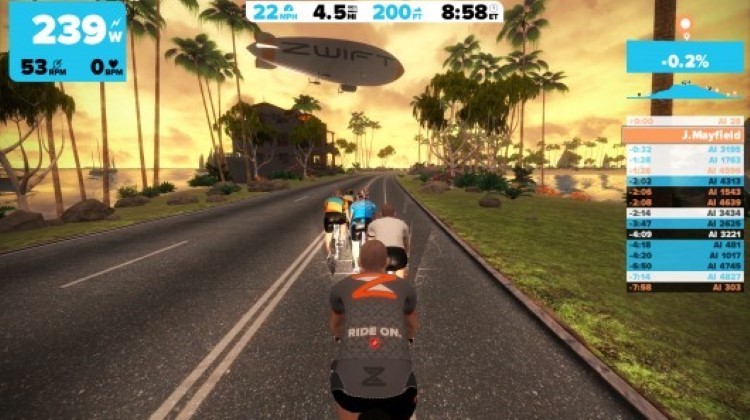 To be able to take part and use Zwift, you will need a trainer for you bike along with the ANT+ cadence/speed sensor and ANT+ dongle. If you're a keen cyclist you may already have these to hand. You will also need a laptop or desktop computer that has a connection to the internet.

When you have all of this set up you can then take part in races and group rides using an avatar in a wide variety of virtual locations. Feedback is given in real time via the ANT+ sensor and the avatar on screen will travel at the same speed as you and speed up or slow down just as you do. Along with this you will be able to talk to other riders, providing you have a headset.

If you have a “smart trainer”, the Zwift system can vary the amount of resistance in order to recreate variables such as winds, hills and drafting caused by other riders.

The company offering the system comes from the UK and they said that their custom gaming platform is able to bring tens of thousands of people from all around the world together on a single map. They are planning to create over 10 different maps over the next year along with riding events, which will include Gran Fondos, charity rides and licensed races taking place at each location on different dates.

Zwift was launched in the public phase this week; the beta was open to 1,000 people who wanted to try it out. If all goes to play it will be officially available early next year and membership will be available for US$10 per month.

Engineer Removes the Entire Hub From His Bicycle, and It Still Works

What Happens When a Superconductor Meets Ferromagnetic Fluid